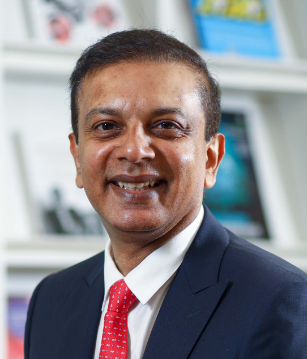 Satish Reddy is the Chairman of Dr Reddy’s Laboratories. He joined the company in 1993 as Executive Director and since then has held positions of increasing responsibility as Managing Director in 1997 and
Vice-Chairman & Managing Director in 2013. Satish led the organisation’s transition from a uni-focused manufacturer of APIs (active pharmaceutical ingredients) to a company that moved up the value chain with a diverse product portfolio of Finished Dosage Formulations. He oversaw the expansion and establishment of a strong footprint for Dr Reddy’s finished dosage products in Russia, CIS countries and other emerging markets.

As an active member of major industry associations and governmental panels, Satish played a key role in shaping policies concerning the pharmaceutical sector as well as the economy, such as policy formulation on India’s patent law, drug pricing and important amendments to the Drugs & Cosmetics Act. He was a member of the Drugs Technical Advisory Board of India, the Chairman of the Andhra Pradesh Chapter of the Confederation of Indian Industries (CII) and head of its National Committee on Pharmaceuticals. He was the President of the Indian Pharmaceutical Alliance, a premier industry association of leading research-based Indian companies. Satish also Chairs the Life Sciences Skill Development Council under the National Skill Development Corporation (NSDC), an organization, working in partnership with various stakeholders groups, to serve and address the skill shortfalls in the Life Sciences sector across India. In May 2015, the Ministry of Labour and Employment, Government of India, nominated Satish as Chairman of the Board of Governors of the National Safety Council.

Keeping true to the legacy of the founder of the company, Dr Anji Reddy, Satish drives the organisation’s Corporate Social Responsibility initiatives. The Dr Reddy’s Foundation, of which he is Chairman, works to help the less privileged create sustainable livelihoods through appropriate vocational education. He is a Trustee of the Naandi Foundation, which works in the areas of child rights and education, safe drinking water, agriculture export marketing support and other much-needed empowerment initiatives that India needs. Satish is also one of the Directors of Dr Reddy’s Institute of Life Sciences, the not-for-profit institute engaged in pioneering and innovative research in unifying areas of chemistry, biology and chemical biology.

Satish was identified as a “Young Global Leader for 2007” by the World Economic Forum and was presented with the “IBLA – India Corporate Citizen of the Year” award by CNBC in 2005 for his contributions to Corporate Social Responsibility. He holds a degree in Chemical Engineering from Osmania University, India, and an M.S. in Medicinal Chemistry from Purdue University, USA, where he received the 2009 Distinguished Alumnus Award from the School of Pharmacy and Pharmaceutical Sciences.