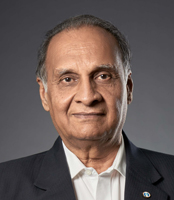 He is the recipient of a number of honors, and has held a range of academic and professional positions in his stellar career in India. He received his Bachelor’s and Master’s degrees from the University of Rajasthan and his PhD from Pune University. He has authored more than 400 research papers. In 1995, he became the first Indian scientist to receive the Alexander von Humboldt Research Award. He has received the Trieste prize, the French award Légion d’honneur, and Germany’s prestigious Cross of the Order of Merit (Bundesverdienstkreuz) Award.